Drilling Into Concrete – Useful Tips You Need To Know

How To Drill Into Concrete

You have to know the tools of the trade, the methods of drilling, and the dos and don’ts.

So if you’re a beginner in drilling, then you’ll find these tips really useful.

They’ll help you understand the process of drilling properly as well as the things that you need to know to keep yourself from any injury.

Let’s start with the recommended tools

You need a hammer drill or a rotary hammer, depending on the type of job that you want to do.

Furthermore, you have to make sure to use masonry drill bits or concrete drill bits. These drill bits are the more recommended type because they’re made out of very durable steel that can pierce through metal.

If you’re using a rotary hammer, you can also use the same drill bit. You may also use a regular drill if you’re drilling small holes, but for concrete, we definitely recommend that you use either the hammer drill or rotary drill.

The more recommended tool of the two would be the rotary hammer since this one is more powerful.

Of course, you can choose any of the two. It depends on which one you can afford also. 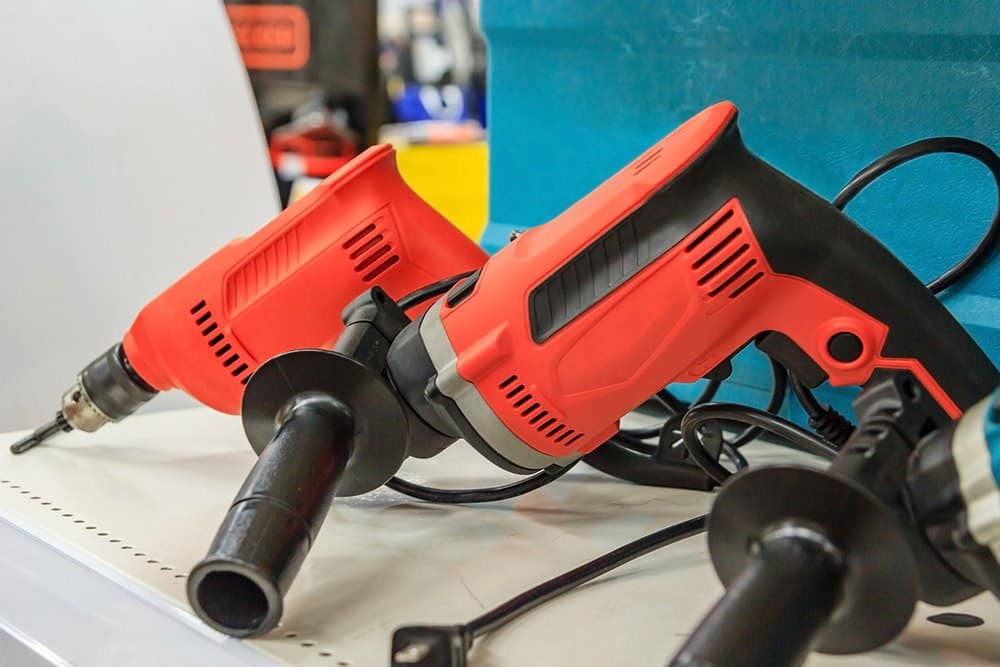 Other recommended tools that you may need include a masonry nail to take out obstructions in the wall and canned air to blow the dust away.

When you have your drill ready, you have to make sure that your drill has a good grip so that it won’t slip off while you do your work.

It must also have a depth setting and variable speed to make things easier.

After you have set up your drill, follow these tips to get the job done right: 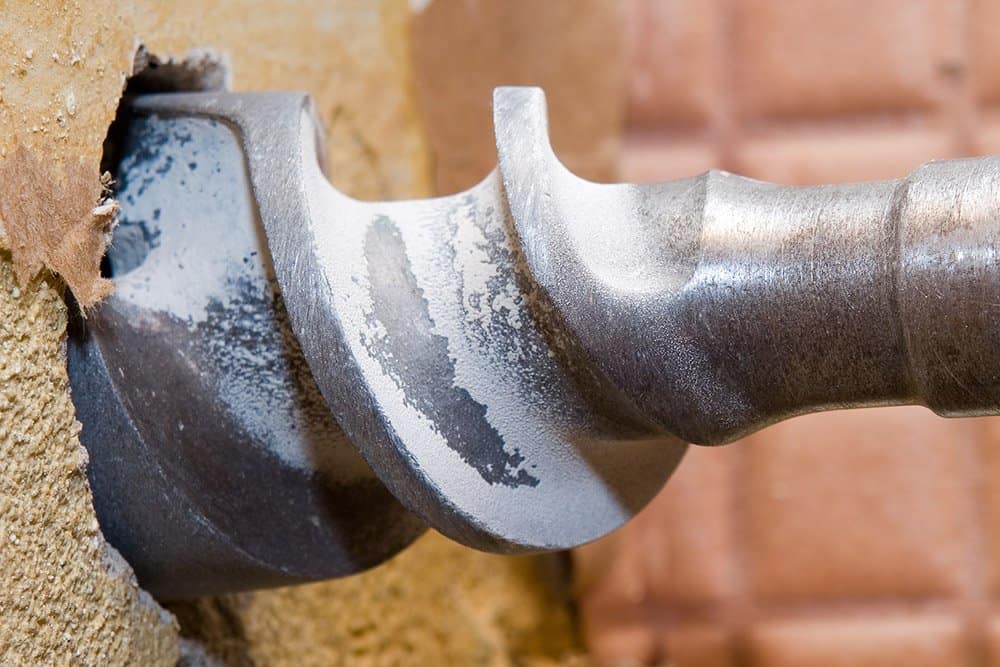 Now that you know the tools of the trade and some ways on how to drill into concrete, let’s go through some of the dos and don’ts starting with the dos. 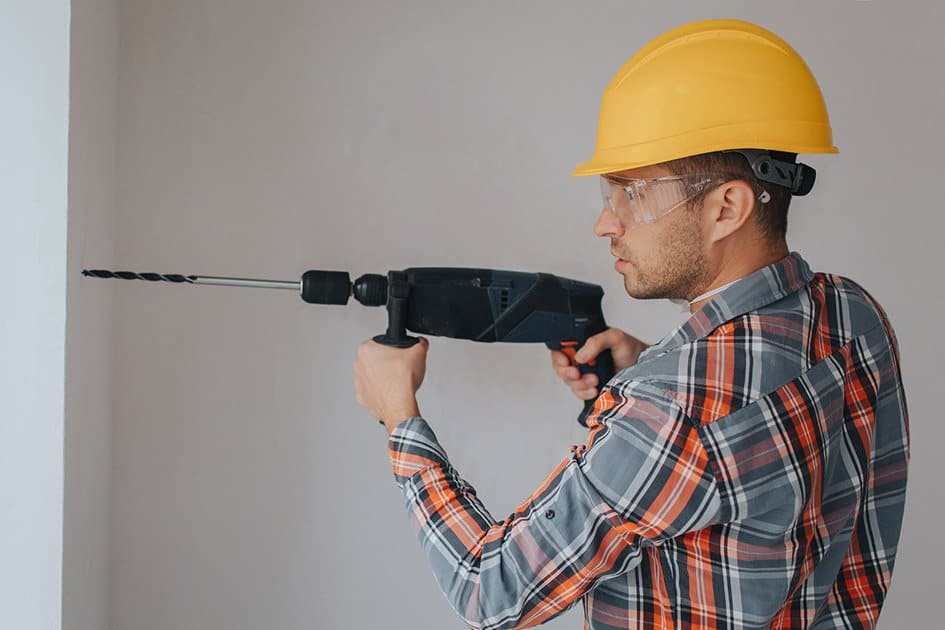 Those are some of dos and don’ts that you have to observe before starting your project.

Always take note that using a drill can be dangerous if you don’t know how to use it properly.

It is also quite vulnerable to wear and tear if you misuse it.

So, it is essential to learn how to drill into concrete properly to avoid mishaps, including damaging your drill.

Earlier, we mentioned that masonry drill bits or concrete drill bits are the most recommended type of drill bit.

If you’re a beginner though, you won’t really know what masonry drill bits are and how they differ from other drill bits.

Thus, we will explain what masonry and concrete drill bits are and why they are ideal for concrete.

What Kind Of Drill Bits Do I Need For Brick Or Concrete?

Since brick and concrete are quite similar in density and hardness, the same type of drill bit can be used for both of them.

The best type of masonry drill bit to use for brick or concrete would be the tungsten carbide tip drill bit.

These drill bits are the hardest and sturdiest out of all the drill bits. They’re hard enough to break through concrete without breaking apart.

The great thing about masonry drill bits is that they are built for pulverizing hard materials.

They’re not sharp like most other drills, but rather they take the shape of a masonry nail. That’s why they can pierce through brick and concrete.

They do come in several sizes depending on the type of job you need to be done. The smallest ones would usually be under 5 mm, and the longest ones would reach up to 40 mm. 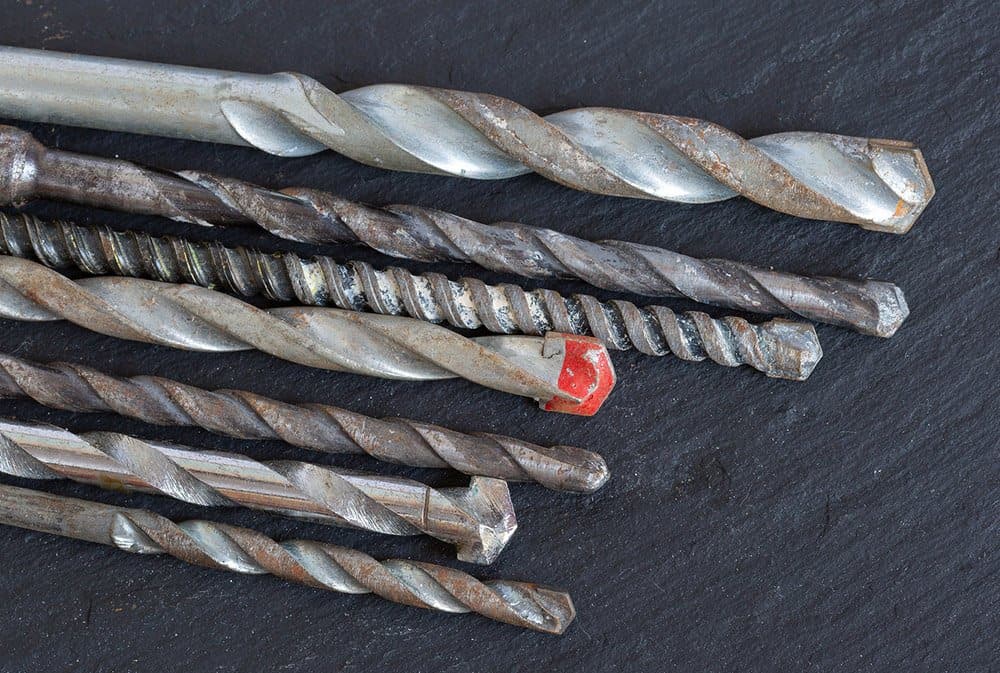 Other than the tungsten carbide tips, there are also the durium tips.

If you want to drill really big holes though, it might not be advisable to use the regular masonry tips since it won’t be able to give much coverage.

The best alternative to those is what’s known as the diamond core bit.

The diamond core bit resembles the shape of a hole saw but a bit bigger. Because of its size, it’s possible for this bit to drill very big holes in concrete and brick - even much bigger than what a regular masonry bit would give.

Difference Between Drill Bits For Brick And Concrete?

Since drilling into concrete slabs and bricks are both masonry work, then they both can use the same type of drill bit. Also, concrete and brick are built very similarly.

Their hardness is pretty much identical, so it does make sense that the same masonry drill bit used for can concrete can also be used for bricks.

In fact, masonry drill bits can also be used for stone blocks and quarry stones.

That said, there is really no difference between the drill bits used for brick and concrete. They are the same.

Can You Use A Regular Drill To Drill Into Concrete?

Yes, you can if you’re only going to drill a few small shallow holes into the concrete surface.

If you’re going to drill several deep holes into concrete though, we don’t recommend that you do this since your drill might not be able to handle it.

Take note that concrete is very tough to pierce through and not all drills have the power to do that.

Hammer drills or rotary hammers are still the best drills for concrete walls since they have enough power to penetrate that type of material.

What Is The Best Drill Bit For Concrete?

As mentioned above, the best drill bit for concrete would be the masonry drill bit (either tungsten carbide tip or durium tip).

For bigger jobs though, it is recommended that you get the diamond core bit since this type of drill bit is much larger and thicker.

Can I Drill A Hole In Concrete Without A Hammer Drill?

Yes, you can. You can use a regular drill if you’re going to burrow small holes into the concrete.

Other than that, you also have the choice to use a rotary hammer.

That said, you don’t necessarily need a hammer drill to drill holes in concrete as there are other alternatives.

How Long Does It Take To Drill Into Concrete?

This will depend on the thickness of the concrete, the hole size you want, and the type of concrete drill you’re using.

Just to give you an idea, drilling a 1 ½ inch hole in a 4-inch concrete slab using a hammer drill would probably take around 60 seconds. It would take a shorter time using a rotary hammer (approximately 20 seconds). You can use that as a guide.

Do I Need A Special Drill Bit For Concrete?

Yes. The two types of drill bits that should be used for concrete would either be a masonry drill bit or a diamond core drill bit.

How Do You Drill A Small Hole In Concrete?

You must first have the right type of drill and drill bit for the job (either hammer drill or rotary hammer).

Once you have the right drill, mark the place you want to drill with a marker and slowly drill a trial hole at low speed. The trial hole should be 6 mm.

After that, pull out the drill, increase the speed, and gradually drill at the trial hole.

Take the drill out every 20 seconds until your hole has reached the desired depth.

Do You Need A Hammer Drill To Drill Into Concrete?

Not necessarily. You may also use a rotary hammer to do this.

Can You Use Regular Screws In Concrete?

It is not advisable since regular screws may not be able to hold thoroughly.

It’s more advisable to use concrete screws instead.

You can refer how to screw into concrete via the below clip:

Can An Impact Driver Drill Into Concrete?

Yes, it can, but its primary function is to drive and remove screws from the concrete. Since that is its function, it may not give you the same results that a hammer drill or a rotary hammer.

How Do You Attach Something To Concrete Without Drilling?

You may use concrete adhesive to attach something to concrete without drilling.

However, it’s more advisable to drill a hole to attach something as adhesive may damage the concrete in the long run. Holes, on the other hand, can be filled any time.

If you want to hang a heavy picture frame, you should use concrete anchors.

There are 8 types of concrete anchor bolt design:

What's The Difference Between A Hammer Drill And An Impact Driver?

The main difference between a hammer drill and an impact driver would be in the torque and rotating action that they provide.

The impact driver exerts a higher rotating power as compared to a hammer drill because of its basic function, As mentioned, the main purpose of an impact driver is to take out or install screws, so it focuses more on spinning power rather than direct force.

The hammer drill, on the other hand, has both spinning force and direct force similar to that of a jackhammer.

If it’s your first time in drilling into concrete, then read our complete guide. As long as you know the dos and don’ts, nothing could go wrong.

The Best Pole Saw to Keep Your Trees in Check